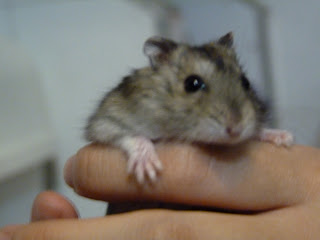 I've managed to make furiends with him, but he's still a bit skitter-ish. He's apparently very sweet (phfft).
This is the girl that A adopted from SPCA - Skittles. She's gotten very fat since she got here, bahaha. 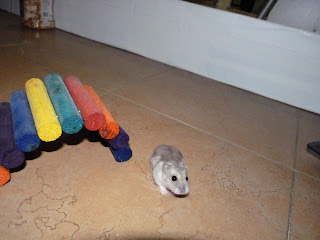 & these are the 2 baby girls that the hoomans brought back from the store (!!!). They are still very small, approximately about 1 month +. They came together, and are both girls, so they can still be housed together. For now. They are starting to show some signs of territory dominance each, so we are guessing that very soon they'll have to be housed separately. 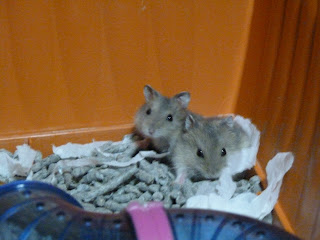 & lastly, this is the last baby hammie that were dropped at the shop, and eventually ended at our home. Also the one whose balls decided to pop out, BOL. He's very naughty, very skirmish, very timid too. 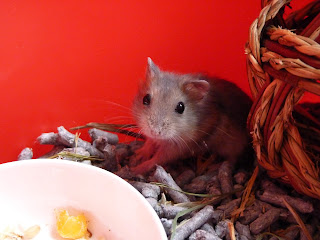 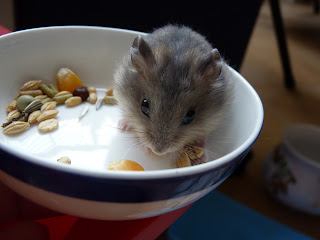 Most of you have suggested to change his name to Bobo, but unfortunately, we can't name him that because... Coco's sister's name is Bobo! Hehe. She was the first hamster in the house to cross over to the Rainbow Bridge, and also A's sweetheart hammie.
So, here are some names that A are considering. She's a bit lousy and weird with names. & because Mom is not very good in English (which explains the Chinese name for her new hammie furkid), A can't name the boy something to hard to pronounce. Sheesh.
Billy Bob
Bingo
Binky
Blizzard
Scooter
Speedy
A would like your opinion on which sounds better, or if you have a better name, just put it down! Hehehe.
In other news...
It's RA's Gotcha Day today!! And he's hosting a Comment-a-thon in honor of it. So please go over and find out more about the details, drop him a comment, and empty his hooman's wallet!
Pepsi

The Ladies of Beaglebratz Manor said...

Shiloh here - welllllllll, if u REALLY must name him, I'm with Frankie on that name, Scooter. (However, I CAN think of other things tu du with him - butt if u like him tu stay with u then that iz all rite)

PeeS - By the way, don't fergit my barkday pawty - give-away on Saturday.

The Ladies of Beaglebratz Manor said...

Whoopzie - You haz already been by MY bloggie this mornin'so I bet u won't fergitz - u iz one brite doggy.
~Shiloh~

Pepsi where do you KEEP all those hammies?? They must have a super duper hammie MANSION! Can we see? Can we see??

Scooter is a great boy name, Pepsi. We bet he won't be timid for long.

We stopped by and sent some wishes to Ra for his special day.

I think we are in the minority here when I say I like "Blizzard," but Scooter is quite fitting for a hammie. :)

Well, we have to go with Scooter, too!!

Off to visit RA!!

oh yah, I am woth frankie!! Scooter sounds the best and fits a hammie!! Go Scooter!!

Oh my Cod! Are theese ones ever cute! Now, I'z going to bug my Human to get some hammies at my house, so I can watch them for entertainment because we'z lacking in the birdie department. For names, Scooter is cute, so is Billy Bob and Bingo. (Bingo was my first name at the rescue I lived at, then my Human found me and named me George Clooney.)

You have an entire hamster village living at your house! Scooter is a fine name but one of the other name's A is considering is also the answer to our quiz question about dogs...hint!Thinking Cap Tuesday hint!

NAK and The Residents of The Khottage said...

My Auntie Di and Unkhle Paul had hamsters when they were human pups!

You are one smart pup, Pepsi! Since we gave you a hint and since A is so devoted to helping animals in need we would like to change your prize to a donation to the charity of your choice. If that is ok let us know which charity and a website so we can get in touch with them. Congratualtions.

They are adorable!
Kisses and hugs
Lorenza

we's missed you all while we were away -

Oh those hamsters are so cute...They look so sweet just like you...:D

How cute they are, Pepsi! We love the name Scooter too!

They are all adorable :)

Waggin at ya,
Roo

Hi Pepsi...those hamsters are cute as can be...Mom has a suggestion of a name. WAY back 100 years ago (mom is older than dirt) there was a cartoon character Topo Gijo, pronounced 'toe-po' Gijo pronounced 'gee-joe). He was an Italian mouse and Mom just loved to watch him and hear him talk with his Italian accent. Maybe you could name one hamster Topo and the other Gijo
Hugs Madi

AHH those are some furry cute hamsters! How cool SPCA is rehoming little furries too. I think Scooter is nice but what about PeeWee Herman? Hoomie Melissa's small hermit crab is named that. Or what about, Mini Me? NomNom? Popcorn? OH I know! Leonardo DiCaprio!!! TEE HEE

I vote for Bingo. Gracie likes Blizzard cuz it reminds her of the Dairy Queen> oh gracie!!

They are so cute!

Just wanted you to know we borrowed momma's plastic card this morning and made a donation in honor of your Super Smartness to World Vets to help the victims of Japan's disasters. Thanks for playing Thinking Cap Tuesday with us.

it's super duper awesome to officially meet you 'n stuffs! i mean you are only like the most totally cool lead guitarist in the WHOLE WIDE WORLD! i'm filled with the honorments that you wanna be my friend, and of course you can have some way delish pie! teeheehee. :)
anywho, so i read all about your pack, and i think it's neato that your mama and miss A have given a grrreat home to so many hammies! it's nice to meet the new dudes 'n dudettes. they sure are cutesies, but do you evarrr get the urge to just kinda maybe taste one...maybe a little nibble on their toesies?? heehee. my mama is givin' me the hairy eyeball for pawin' that. gettin' back to the businesses, though, i totally dig the name bingo for the naughty 'n timid little dude! :)

I love those pictoowes of youw Hammies. Thay awe vewy cute and I think Scoootew would be a pawfect name fow the little boy
smoochie kisses
ASTA

Oh our dogness those hammies are sooooo cute. Given that we are unusual wirey ones, with very little (if any) prey instincts, we're guessing we would like them just as much as we like kitties. So so cute! And ... as for names ... we like Scooter, too. Sometimes Moma calls Fergi Scooter 'cause she ... well ... scoots when she's really happy!

Okay, we'll join in with Scooter. Sounds like a happy hammie name :)

We are so happy to meet the new additions to the family. They are all so cute little baby hamsters. Thanks for sharing the wonderful post. Have a fantastic rest of your week.
World of Animals 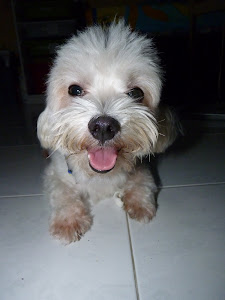 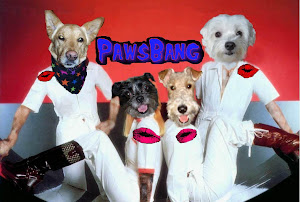